In the last Turnaround I was on, there were three activity statuses to deal with in the Pre-Turnaround activities:

The company had set up a “Phase” activity code at the global level to signify the phase in which the activities were to be done. 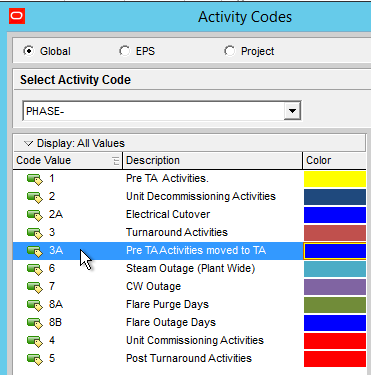 This wasn't just a matter of copying and pasting the activities:

Case 1: Pre-TA activities that weren't started before the TA started

The original activities were changed in Excel and updated in P6 using P6-Loader:

In the resource extraction sheet, a VLOOKUP was used to find the resources that needed to be updated to reflect the resources being used for the Turnaround phase. The Activity Id was appended with “-a” to assign the updated resources to the new Activity Id. Note that the ActivityId-Original, ResourceId-Original and VLOOKUP are columns that I added to the spreadsheet to ease the calculations - P6-Loader will ignore them.

The next step was to remove any of the relationships with a Pre-TA start or finish milestone. The activities were filtered down to only the predecessors and successors that were Pre-TA milestones, marked to be deleted and loaded into P6. The ability of P6-Loader to delete data was a great help here.

With the previous load done, we were ready to move the “In Progress” activities. These are activities where work was started in the PRE phase but wasn't completed. In this case, we need to split the work to show that some hours were earned in PRE and some in TA.

The steps are the same for this move, except the Planned Units, Actual Units and Remaining Units for Resources were stored so they could be used to update the activities with the correct numbers.

The stored Actual Units were used to update the Planned Units and the Remaining Units were set to “0” in the existing Pre-TA activities prior to marking the activities as complete. This step ensures that the Earned Hours during the Pre-Turnaround Phase stay in that phase.

The Remaining Units were then used to set the Planned Units on the new activities in the Turnaround phase.

After these few changes to the original steps, the “In Progress” activities in the Pre-TA were completed.

It's common in a TA to mark activities that are very close to being completed or expected to be completed within the current shift to be marked as 99% complete. This allows the hours to be earned for the activity while also creating a checklist of work to be confirmed. A quirk of P6 is that sometimes in the background database, 99% is actually stored as 98.9999 or 99.0001, so an exact match on 99% can be problematic.

Activities that were marked greater than or equal to 98% and less than 100% were marked “Completed” on the existing Pre-TA activities and given full Earned Hours for those activities.

As always, all of our newly created files were first run on copies of each project to ensure our changes were what we anticipated. Changing the ProjectId in Excel is much easier than changing it in P6.

The result was the the TA team had accurate and timely reporting of progress in PRE and TA without a lot of manual activity creation.

At Emerald Associates, Sue is an Implementation Specialist and has been successful at drawing on her accounting and project management background to consult with our diverse client base. With her friendly demeanor and strong communication skills, she has become a talented Primavera trainer and works very hard to effectively implement Oracle Primavera solutions that cater to each client’s unique organizational needs.