DOT's and Emerald Associates - We Can Make Your Job Easier

Emerald Associates is well known in the US and Canada for our homegrown add-on tools for Primavera P6. We have assisted numerous companies in many diverse areas to get the most out of their P6 software. You may wonder how our tools can assist in the Departments of Transportation (DOT) field to get more done in P6, with less time, while still providing useful data to your stakeholders, and remaining good stewards of the public's funds. Our tools will help you do more work in less time, so that your project management group has more time to analyze and perfect their schedules.

Finding Setting Up or Changing Resource Availability in P6 a Struggle?

We have all experienced at one point or another how tedious (and time consuming) setting or changing resource availability can be in the P6 resource dictionary. Particularly for an example like the one we will walk through where you are setting up or adjusting turnaround resources and the weekend rule happens to be ½ crews.

The P6-Loader can ease the pain of these types of tasks.

Global Calendars – Exactly Which Projects Are Using Each Calendar?

In P6, identifying each specific project using each of the Global Calendars in a concise, fast, easy to use manner is challenging. Some may think this is not necessary very often, but in my experience, it has been quite the opposite!

Is this functionality already handled in Primavera P6, Client or Web? A very good question - let’s have a look.

When you have a large number of users in your P6 database, it is surprising how quickly that database can get “clogged up” with a lot of unwanted data. This happens even when using Sandbox databases, restricting privileges and every other trick you have thought of; long time P6 users know what I am talking about.

Primavera P6 UDFs are a Breeze with the P6-Loader

UDFs - Making Sure They are Clean

When working with a client to setup cost controls in P6, we were working with budgets, estimates, work in progress, incurred to dates etc. These required a lot of User-Defined Fields in P6 to make sure we were able to cleanly track all the values we were pulling from the disparate systems from accounting to spreadsheets.

As a contractor, we were planning to track both the costs of the project delivery and the sale to the client. This way we could also report on profit margins and markup.

Project codes in the global dictionary are an important part of an organization's enterprise data in P6. Needless to say, keeping this dictionary (as well as other global data dictionaries) clean and well-organized is an essential task for the application administrator, as well as for other admin superusers. Incorrectly named project codes and project code values result in confusion and translates into unproductive time for the users, which ultimately results in losses for the company.

The Fastest Way to Create New Users in Primavera P6

Login to the P6-Loader with your credentials. 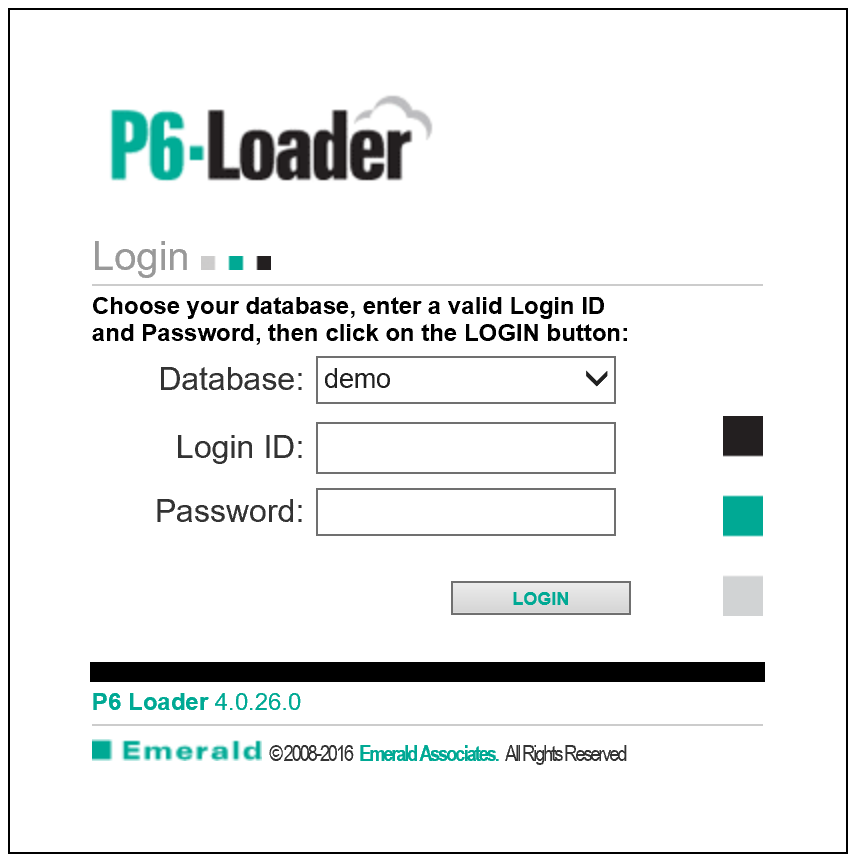 Selecting the proper software licensing model can be a rather cumbersome exercise. It requires IT administrator and project managers etc. to go through many different steps and ask questions such as:

The P6-Loader Saves the Day!!!

We are working with a client who is consolidating many separate P6 databases into a production database, turnaround database and an archive database. Along with the thousands of projects being exported from the old databases to the new ones, our client wants the baselines for projects exported, imported and reattached for a large number of the projects. If you have ever had to un-assign and restore baselines and then turn around and attach and reassign them for even a handful of projects, you know how tedious and time consuming it can be. First, the baseline has to be un-assigned, then restored to a project in the original database. Once the baseline has been imported into the new database, the baseline has to be converted back into a baseline and re-attached to the original project.

Changing out Resource Assignments in P6 Using P6 Native Functionality vs. the P6-Loader

We often have clients ask us the most efficient way to change out resource assignments. This often happens when work that is expected to be assigned to one resource gets assigned to another.

For example – I want to change the resources in a particular plant from my own staff and assign it to a contractor. In this simple example, I have decided to give all the trade work in one plant to Jacobs instead of performing with my own labor force. I want to remap the resource assignments as follows:

How to Input Actuals Into Primavera P6 Efficiently

Getting a Broken WBS in Your Baseline Project When Migrating from Primavera P6 8.x to 15.x

Are you getting broken WBS elements, WBS elements appearing as projects or errors such as "is not a valid integer" when migrating?

To our surprise, when we imported the baselines as projects into the new 15.2 database, the WBS elements were all messed up. Instead of one project with many WBS elements, our project appeared as many different projects, one per WBS, all with the same Project ID. They also appeared outside the EPS structure and P6 wouldn’t let us move them into the correct EPS node. Every attempt gave us the error that “ is not a valid integer value”.