We have been using P6 v18.x with several clients and have seen some differing behavior related to caching. It appears the problem may have started as early as P6 v16.x. These clients are in varying environments; P6 Oracle SaaS, EAI Hosted, and on-premise - In short, anywhere where Oracle Cloud Connect is utilized.

We were excited to see the new form of caching that appeared in v17.x. We have clients with poor internet access and P6Web is not adequate for their needs - they need P6 Client. Everyone knows that P6 Client is very chatty and needs good bandwidth to work properly, so the idea that we can cache data and do heavy lifting on our desktop rather than on the server far away was great.

Are You Importing Unwanted RISK TYPES?

Remember our good old friend the POBS Table? Well, we have a new friend in town that is introducing itself to our database in the form of the RISKTYPE table. We have discovered numerous clients are importing XER files to their database that include a large number of Risk Categories, sometimes tens of thousands of them. No one knows where they originated, but they are multiplying and wreaking havoc.

The problem comes when an export file is created with unwanted Risk Types and imported into another database, creating more values in the destination database. The destination database then could share their large number of Risk Types to another database. Each time, the RISKTYPE table is passed along, it grows, spreading and infecting more and more databases.

Are you importing schedules into scrubbing databases, taking out all the unwanted data you don't want to pollute your production database, re-exporting the schedule and then importing it into the database where it should have gone in the first place?

Do you have required specifications your contractors need to follow for their schedules, but have a hard time knowing whether those details are missing or incorrect until you've already imported them?

Do you want to ensure you are not importing POBS tables and corrupted RISKTYPE tables?

That's a lot of quality assurance to do! Maintaining your corporate data standards for dashboarding and reporting can be a full time job, especially when project teams have their own coding structures and requirements for their P6 Environment.

Don't worry; there's relief. Emerald has developed a new tool that will do all that work for you! We are now introducing P6-Scrubber.

When a new client request comes in, you can create a project from ZOHO CRM. For us projects come in several categories and we have task list templates ready to be used to create tasks to charge to.

Typically the first task list is Business Development. We kick off with that and assign the team working on the initiative.

We can then send the project, the task list, the tasks and the resources into P6. We can do that in one step or two depending on the task list development. In this case we have a good idea of the scope of work and were able to put it together with 2 task lists. So we can integrate bot the project and the WBS/tasks and resources right away. So we use a really simple user interface tight in ZOHO projects to kick this off into P6. We tell the integration to send both the project and WBS over.

Once that is done, we can go into P6 and start actionining the work. We also get a message letting us know if there were any issues with the intgration, such as a duplicate project exisiting. If all is good, you should get a PASS message both for the project and for the WBS. 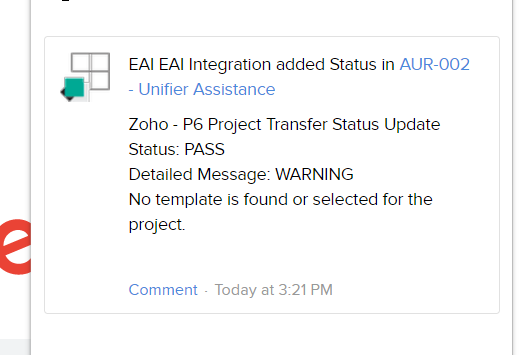 Are you finding when you are importing or exporting a large number of projects that not all the projects are coming across when they are imported?

While converting a client from P6 V8.3 to V15.2, we found the data was not always transferred completely when we migrated large numbers of projects. Instead, with XER file sizes larger than 100,000 KB not all projects were exported and/or imported. We confirmed this recently on a subsequent project with a different client where we were migrating projects from P6 V7.3 to V17.12 and encountered the same issue.

In the first case, we exported the projects using an XER. Our file was over 300,000 KB. We found 4-5 projects were not exported. When we imported the same file, there were 2-3 additional projects that were not imported to the new database.

We looked at additional files for the same client and found that in XER files with a size larger than approximately 100,000 KB there were several projects in each XER missing when the file was imported.

Once we reduced the number of projects in the exported XER files to keep the file size under 100,000 KB, we found no projects were lost and our data was accurate.

Keep an eye on XER files larger than 100,000 KB when importing and exporting, they may not have complete data in them once they are imported.

Are Resource Codes Helpful In a Turnaround Schedule? Yes!

Using Resource Codes has been very helpful on many Turnarounds. Often on a Turnaround (or any large project) you need to report resource availability and requirements in your schedule by Craft (trade) and Company.

But that is often not the way the resource dictionary hierarchy is set up? And you likely are not able to do anything about that since the Administrator probably controls that.

Exactly Which Projects Are Using Each Global or EPS Activity Code?

In P6, identifying which projects are using each Activity Code in a quick, consolidated, easy to use manner is challenging. Especially when you consider some clients have a LOT of baselines.

But is this is r-e-a-l-l-y information we need to be able to capture? In my experience, there are a number of scenarios where that answer is a resounding “Yes”! One common example – the Activity Codes Dictionary needs to be cleaned up.

When you are working on a project and you move from Project into Support, sometimes it is hard to decide the exact cutoff point for the project team to start charging to the new support project. I had a problem the other day where I needed to decide the end date and cut over. The client selected a date a few weeks before we had thought we were going to cut it off after she checked her budgets and we realized we were going to go over.

So I had to go back to look through the timesheets we had submitted in Team Member to get the time reallocated before sending it into our QuickBooks where we invoice from.

Are You Tracking Ideas? Are Approved Ideas Easily Translated into Project Proposals?

Use Oracle Prime to create ideas: capture, evaluate, and process the ideas for new initiatives and business endeavors.

Ideas are processed using a submission and approval workflow. Prime Projects provides a default workflow for processing ideas, or you can create a customized workflow. First the idea creator creates an idea and specifies the idea's business case. When an idea contains sufficient information, the creator can submit the idea for further processing by routers and owners.

P6-QA and the Project Scheduler

Manually wading through a schedule and looking for errors is time consuming and prone to human error. Not only that, it's boring. No one wants to do it, but you need to check your schedule for errors!

Even worse then working through your own schedule for errors, is slogging through a contractor's. When you don't know how they have built the schedule, it can take days to make sure things hold together. Some of our clients have several layouts, reports and even special access databases and outside tools to do this which is very time consuming, error prone and boring.

Finding Setting Up or Changing Resource Availability in P6 a Struggle?

We have all experienced at one point or another how tedious (and time consuming) setting or changing resource availability can be in the P6 resource dictionary. Particularly for an example like the one we will walk through where you are setting up or adjusting turnaround resources and the weekend rule happens to be ½ crews.

P6-Loader can ease the pain of these types of tasks.

Global Calendars – Exactly Which Projects Are Using Each Calendar?

In P6, identifying each specific project using each of the Global Calendars in a concise, fast, easy to use manner is challenging. Some may think this is not necessary very often, but in my experience, it has been quite the opposite!

Is this functionality already handled in Primavera P6, Client or Web? A very good question - let’s have a look.

Do You Need EV Calculated at the Resource Level?

You are correct; out-of-the-box P6 does not calculate Earned Value (EV) at the resource assignment level. It only runs EV at the activity level which is fine for a start, but what to do when you need to 'dig deeper' and analyze crew performance? You can't use Global Change to calculate the resource assignment EV because the activity percent complete isn't available in the Global Change list of fields.

A very simple option is to use TAPS to input your schedule updates. TAPS is barcode updating (with additional functionality). By using TAPS, updates are faster and more accurate giving you (and your team) more time for schedule analysis. Yes, TAPS runs EV calculations at the resource level.

When you have a large number of users in your P6 database, it is surprising how quickly that database can get “clogged up” with a lot of unwanted data. This happens even when using Sandbox databases, restricting privileges and every other trick you have thought of; long time P6 users know what I am talking about.