We have had a number of complaints recently about the POBS imports really slowing down XER import performance and also complaints that the XER files coming out of Primavera P6 are huge.

The POBS was created in the Primavera days for some functionality that was never implemented. The table was never removed from P6 so it sits, like the human appendix, as a useless appendage, until something goes wrong.

Some of our clients have hundreds of thousands of records in the POBS table. The big problem is that every import and export propagates this useless data from one database to another.

There is an additional issue in that some foreign languages (Korean and perhaps others) cause the XER import to crash because POBS records in other languages are too long for an English language database.

From the Oracle Primavera knowledgebase:

Article 1: What is the POBS Table Used for and What Data is Stored in POBS?

Functions related to table POBS have not been implemented yet so the table has not been put to use. The table may be removed in a future release.

If there is data in this table, then it's probably present in the sample database and not inserted during operations performed in the application.

Article 2: POBS Table Has Grown in Size and Affects Performance With Project Import/Export

1.Delete all of the data from the POBS table from both the source database and target

2.From the source database, re-export the XER file (which will ensure the POBS data is not included), and use this updated XER to import into the target database.

If you have an XER file which contains POBS data already in it and cannot obtain a new copy of the XER file, delete the POBS records from the file using a text editor and re-save.

If you have ever tried to edit an XER in a text editor, you’ll know that that is difficult, time consuming and Oracle won’t support you if you break something. Do Not Do It! We had a client who corrupted their entire P6 database when someone edited an XER, changed a single value that they shouldn’t have and then uploaded the XER. Oracle provided no support and we spent a couple of days tracking down the problem to get the client working again.

It is a simple application – it opens an XER, removes any POBS records and then saves the file with the original filename with “-clean” appended. In some cases, we have seen the application reduce an XER’s file size by 80% because the entire POBS table lands in every XER.

To run the tool, simply extract all files into the same directory. The tool doesn’t require an install on the workstation, since most corporations require administrator permissions to install anything. It will extract and create a folder called POBS-Cleaner-App-Native containing one file and a subfolder. Double click the POBS Cleaner file in the newly created folder.

When the app launches, browse to the XER you want to clean: 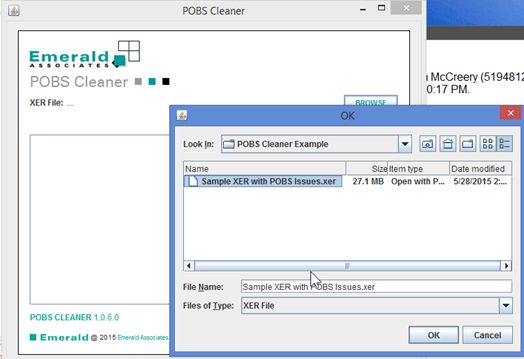 Click Run and the POBS Cleaner will remove all the POBS elements from the XER and create a new file with the extension “-clean” in the same directory.

This tool is free to our clients and the P6 community and is offered as a courtesy. No warranty is expressed or implied. Contact us for your free copy.

If you like this tool, check out our other P6 add-ons.