Primavera P6 UDFs are a Breeze with the P6-Loader

UDFs - Making Sure They are Clean

When working with a client to setup cost controls in P6, we were working with budgets, estimates, work in progress, incurred to dates etc. These required a lot of User-Defined Fields in P6 to make sure we were able to cleanly track all the values we were pulling from the disparate systems from accounting to spreadsheets.

As a contractor, we were planning to track both the costs of the project delivery and the sale to the client. This way we could also report on profit margins and markup.

Now this team was moving from P3 to P6 and we were handling a lot of change with this migration. So during one of our design discussions, we were finalizing the business processes we were modeling and looking at markup when the PMO lead said,”I don't think we can deal with markup right now, we better wait”.

Now of course that was a bit frustrating because we had discussions, mockup fields in place and P6-Calculator features ready to go, but change management and making sure the client's team can cope with the change is critical to success. We do run into situations sometimes when functionality needs to be put on the back burner or moved to phase 2. When that happens, how do we deal with this change? With the P6-Loader. It was not too hard to deal with renaming and/or removing the fields we were not going to use in the first phase of the project.

The markup fields including percentage fields were piggybacked into P6-Calculator to auto-calculate the markup on each resource and expense. We used a standard markup and allowed an override where appropriate to make it flexible to price in different markups. We even looked at pulling this automatically from a resource in the dictionary.

We then added the markup onto the estimate to come up with the total sale price. We used P6-Calculator to roll it up onto the project so we knew the total markup we were going after on the project.

So to clear these UDFs we had two choices. We could rename them or we could delete them and reload them down the road in phase 2. No matter which one we chose though, first we needed to extract the UDFs.

Step 1- Extract UDFs
Since P6-Loader extracts all the UDFs regardless of what part of P6 they are attached to, it makes doing this type of cleanup really fast, easy and pretty much error proof.

Here are the extracted UDFs. We have over 300 in this database. You can see I have a few with markup in there, at different levels in P6 from the project to the activity to the expenses. If we were to do this manually it would be difficult and easy to make mistakes. 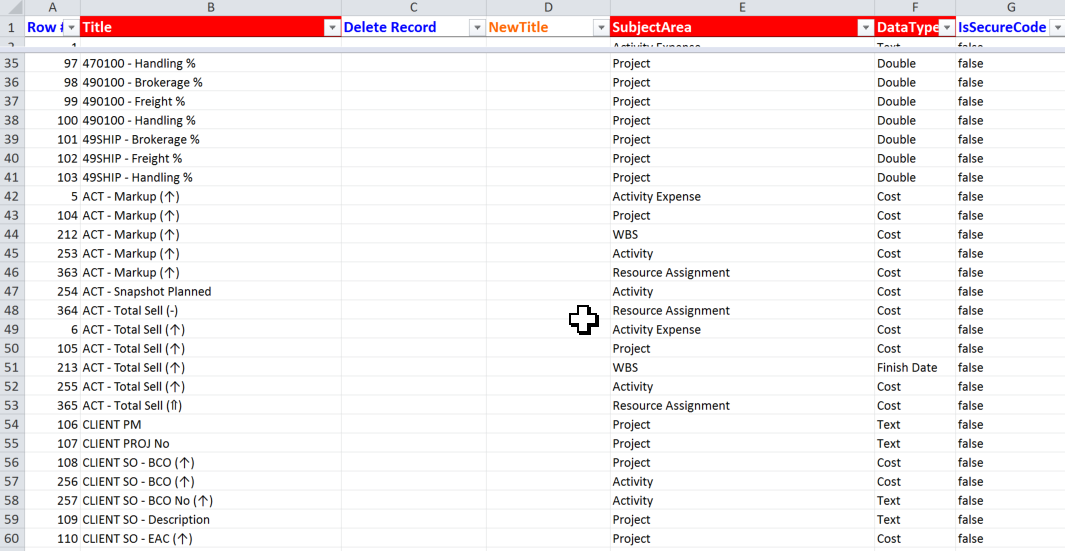 So in Excel, I filter by the title “markup”

Then you can easily rename them for future use. I like to put ZZ in there so that it sorts to the bottom of any list, it is out of my way, but I don't lose it so I can re-use it later. In this case I am putting in P2 so I know it will be part of phase 2 scope.

If I would prefer to delete these, I'd use the Delete Record and fill it in with DELETE. Simple as pie.

I then go into P6-Loader and browse to this file and re-upload. It is super fast; much faster than in P6, and I've done all levels without worrying I missed something.

I use the P6-Loader all the time in a rollout, probably 2-3 times a day easily when designing and refining lists. I love how fast it is and how easy it is to collaborate with a client letting them do the extracts and cleanups too.